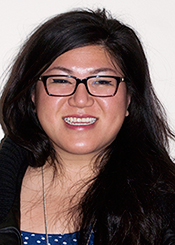 How many students do you know that have been awarded 16 scholarships in four years? Skyline College student Irene Yim has accomplished this academic achievement with hard work and dedication to her studies, making this feat seem easy.

Irene is a second generation Chinese American, who was born and raised in the Bay Area. Her parents came to the U.S. and made their living in the food industry, owning and operating Chinese takeout restaurants throughout San Jose, California. The taste, love and passion for cooking and food have always been a part of Irene and her family’s life. After graduating from high school in 2000, Irene attended Culinary School. While in Culinary School, she realized that she did not want to follow in her parents’ footsteps managing restaurants. Although Irene had no desire for restaurant management, she still wanted to work with food, but was unclear on her career path and the available options.

It was not until Irene was exposed to the area of study called Food Science, the applied science devoted to the study of food that she realized she could study and make a living doing what she enjoyed. Irene decided to go back to school. Three years ago, Irene enrolled in Skyline College to finish her lower division classes and study Natural Science with the goal of transferring to a 4-year university. Irene prefers Skyline College to other schools because she loves the teachers and the smaller, engaging and interactive class sizes, versus the overcrowded classes at some other campuses.

Without Skyline College, Irene would not have had the direction and information she needed to accomplish her academic goals. This past year Irene dealt with a family tragedy; her sister passed away. She felt like she would not have been able to get through it, if she was at any other school. She was grateful to be at Skyline College as she received support. Irene states, “I’ve built a lot of relationships with professors, counselors and students her; and being around people with common goals to succeed here at Skyline College has given me the confidence and direction I’ve needed to achieve all my academic successes and set my path for my future.”

Irene currently serves as co-President of Skyline College’s Society of Asian Scientists and Engineers, where she encourages students to apply for research internships, and has taught workshops on scientific resume writing. One of Irene’s biggest accomplishments was at the 2013 Annual Biomedical Research Conference for Minority Students where she won for her undergraduate microbiology research presentation.

Irene also previously served as the President of Skyline College’s Phi Theta Kappa Chapter-Beta Theta Omicron, where she helped develop a service project for middle-school science programs called SMiLE (Science for Middle-school Laboratory Experience). SMiLE has taught over 600 middle-school students. As the coordinator for SMiLE, Irene has not only promoted the importance and fun of hands-on science learning, but has also provided service/leadership opportunities for Skyline College students. Irene Yim is a prime example of the Skyline College mission statement, “To empower and transform a global community of learners.” We are very proud to have her as a student at Skyline College and highlighted in our Student Spotlight.